Couple days before the anniversary I asked Bi what will we do to celebrate it. He said it's up to me. Because I didn't have an idea, I made a list - 50 things we have never done together. I didn't write any specific place because if I had done, I would have written a thousand places we have never been to. Then, I asked him to choose one of 50 things that I wrote. He didn't choose any of it, but he said to me "You said you want to take me to eat in Satoo." I assumed he choose number 10 which is 'Eat in 5-Star Hotel just the two of us' 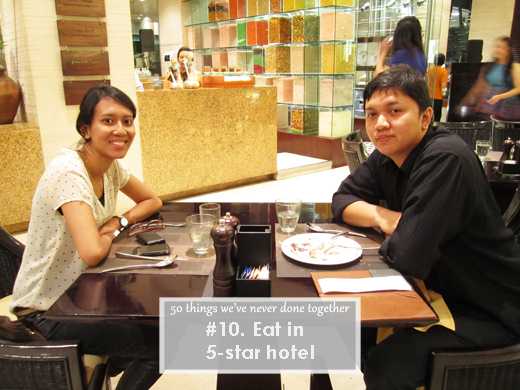 After we spent a whole day in Water Bom (I will tell about this later) we filled our empty stomachs with abundant food in Satoo, Shangri La, Jakarta. (We made a reservation only two hours before, even though we have planned it couple days ago)

I like Satoo for its free-flow water and the various desserts which look very beautiful. I also think Satoo is a right place to celebrate our first anniversary because in Bahasa, Satoo (Satu) means one. Hehehe.. It's expensive though, around 375.000 rupiah/pax. Oh, if you think it is a romantic dinner, you absolutely wrong. The place is full of people and buffet makes you leave your table quite often.

Anyway, I am happy to cross off number 10 from my list. One done, 49 more things to experience. :D
Labels: 50-things-we've-never-done-together English Life. Menikah